In my diary (= Bobby’s Diary), I once wrote about Origami, a paper-folding technique, which is one of the traditional arts in Japan. I am ‘beary’ good at Origami. So, I would like to show you how to make a cherry-blossom tray by Origami papers. You need five sheets of square paper. Are you ready? Let’s make it together!

(2) Then reopen it, and fold in both sides to the centre.

(3) Fold down the white part, and open both sides.

(8) Open up the top layer, and fold down the triangle.

(9) Insert it into the triangle on the other side, and put back the top layer.

(10) Fold the triangular part down.

(11) Open up from the inside and fold it down. Then open the box.

(12) Fold the top triangle in along the lines. Then open the box. One petal is completed.

(13) Make four more, and glue them together.

Why don’t you try with papers in different colors or textures? You can put some small things in the tray, such as candy, accessories, and clips. If you make one and put it on the table at home or on the desk in the office, you can bring in “spring” where you are! 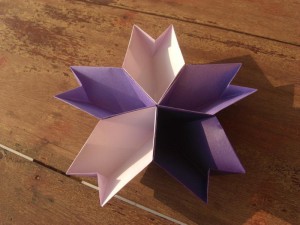 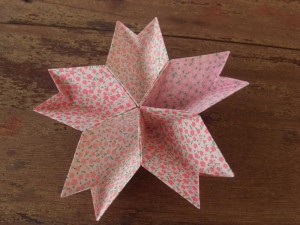 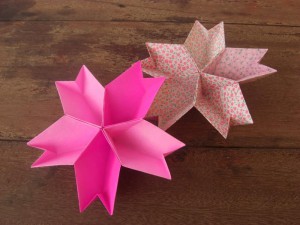 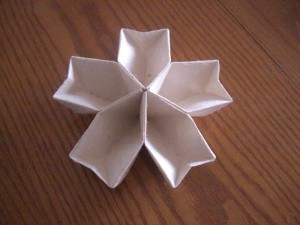