Tip 3: Penalties Decided by All

The third tip for success is that in the Cherry Center, not only the rules but also the penalties are decided by all the members. The following are some of the penalties that may be imposed. If they violate a rule, they will have to be penalized as shown in the table: 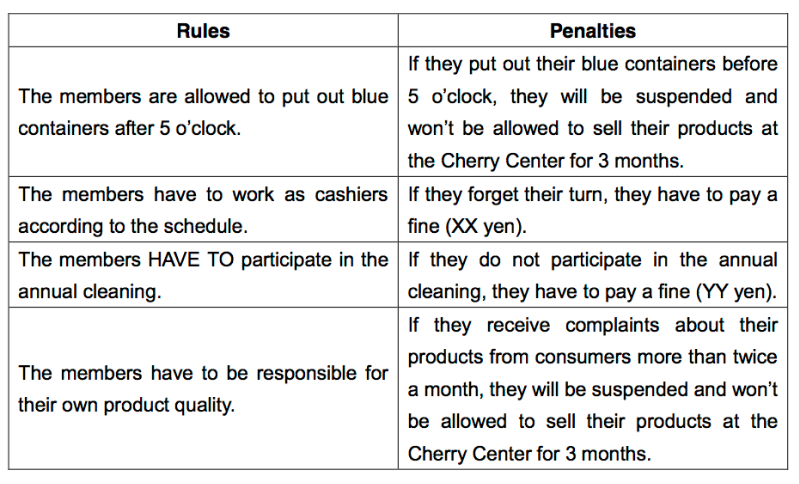 The fourth tip for success is that all the duties are shared among all the members, and opportunity is always given to the members equally. For instance, they have to participate in the annual full-scale cleaning. If they forget to attend the cleaning, they have to pay a fine.

Cashier duties also rotate. Three members on weekdays, four on Saturdays, and five on Sundays and national holidays work at the register in rotation. Since there are about 100 members in the Cherry Center, every member works as a cashier once or twice a month. If they forget their duty (shift), they have to pay a fine to the center. If something comes up and the member cannot fulfill her duty, she asks another member if she can switch with her. The members are responsible for the same amount of duties, which fosters the ownership of all the members of the Cherry Center.

Generally speaking, in any shop, products displayed near the entrance tend to attract more attention than in the interior of the shop. It is quite natural that people want to sell where their products sell better. If the places where they can place their products are decided based on a first-come first-served basis, conflicts may happen among the members. To avoid this, in the Cherry Center, where the members can place their products is decided by a drawing to ensure equality. No member can complain because it is decided that way. To ensure further equality, however, a drawing is conducted twice a year, on May 31st and December 30th. Even if somebody gets a “good” place, she cannot occupy the place for a long time. Conversely, even if she gets a “bad” place, she does not have to fret over this. She has a chance to get a better place in the next drawing. This system guarantees 100% equality and transparency among the members. What a nice system!

The members open an account when they become a member of the Cherry Center. The money, which is 91% of the total sales, is transferred into their own accounts three times a month (on the 5th, 15th, and 25th). This quick and frequent payment system helps their livelihoods and encourages them to work hard.

There is another system that motivates them to work hard. In the office of the Cherry Center, there are small mail boxes for the members. Each member is given a mail box where information letters and sales records are put. Each member has to put a product price tag on each product in order to sell the product at the Cherry Center. The tag carries information about the producer (= member) and the product, including the seller’s name, ID number, address, phone number, product name, price, ingredients, freshness date, and preservation method. At the cashier, the bottom part of the ticket is cut off on the perforated line, and is put in the basket beside the cash register. 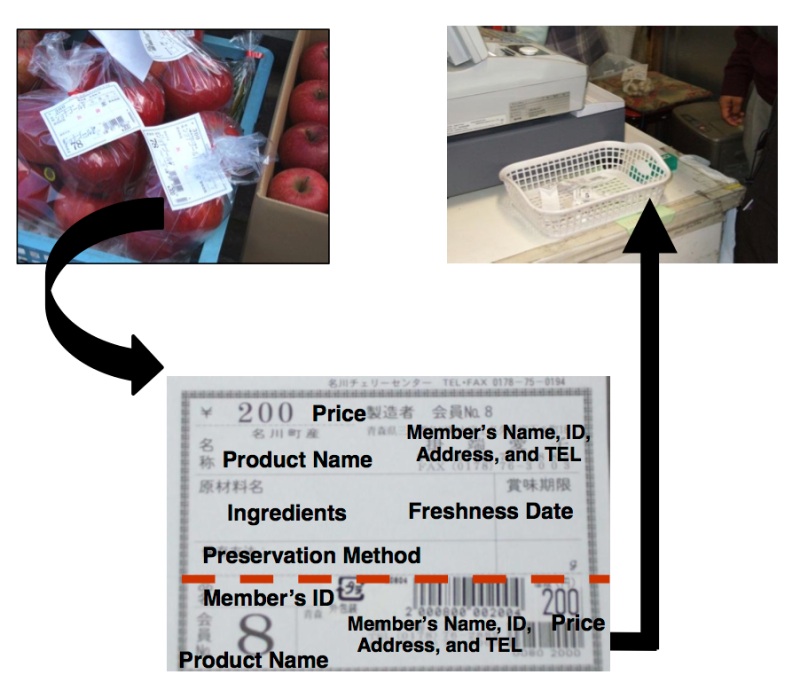 Later, the detached slips are put in each member’s mail box. Around 6 o’clock every evening, members come to the office to check their mail boxes. They take the collected slips back home. Based on those slips, they calculate their total sales for the day. Thanks to this system, they can learn how much they earned, also which product(s) and how many products were sold that day. Bearing such information in mind, they can plan their own production and marketing strategy. What is great about this system is that they can be better motivated to work for the next day.

Every year, on December 30th, the Cherry Center holds a plenary annual meeting. In the meeting, the president reports to the members on the total sales of the year. When the sales are in the black, the profits are divided among all the members equally after the operation and maintenance costs are subtracted. Everybody can receive the same amount of the year-end bonus if the center keeps the balance in the black.