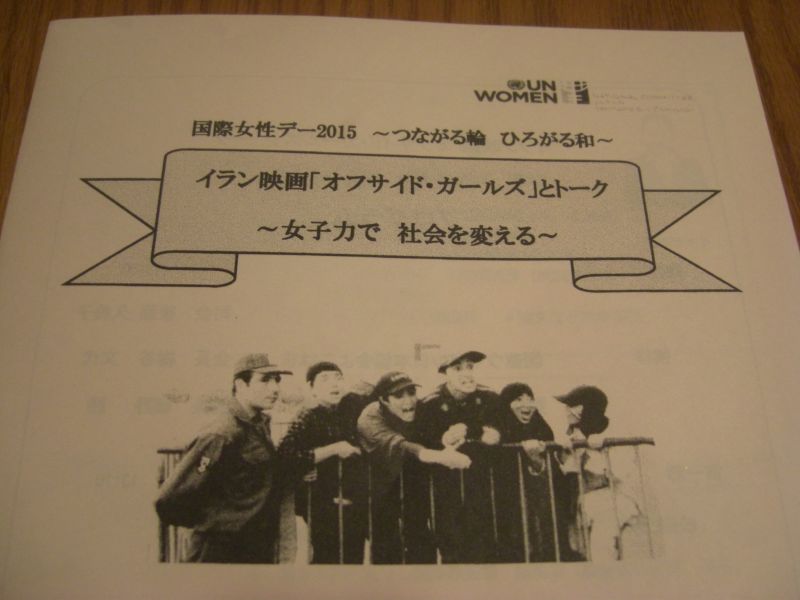 March 8th was International Women’s Day. The National Committee Japan of UN Women (the United Nations Entity for Gender Equality and Women’s Empowerment) organized an event to promote gender equality at the Forum Minami-Ota in Yokohama City, Japan. At the event, an Iranian movie titled Offside Girls was shown. The film is about some enthusiastic Iranian girls who dared enter a football stadium to watch the final of the Asian preliminary round between Iran and Bahrain. In Iran, men’s football matches are only for men, and women are not allowed to enter the stadium. However, the final was a very important match for all Iranians: If Iran beats Bahrain, Iran would qualify for the 2006 World Cup in Germany. That was why all Iranians, including women, were so enthusiastic about the final against Bahrain. 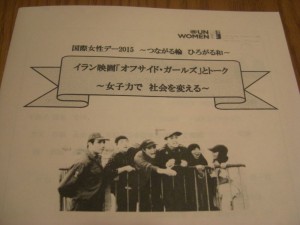 The film showed how some young enthusiastic Iranian women tried to enter the football stadium to watch the final. Can you guess what their plan was to get through the gate in spite of the strict security? They dressed as men! Unfortunately, despite their best efforts, they could not get in. They were “temporarily arrested” by the security guards. Look at the picture from the film above! They are all women except for the person on the left. He is a security guard, but the other five are all women. The film illustrates gender inequality in Iranian society, and lets the audience think about how they could “correct” the social distortions which were implied in the film.

My mom, who is Japanese, watched the film. She says that the film made her think a lot about gender equality and women’s empowerment. In Japan, anybody, regardless of sex, can enjoy watching a football match in a stadium. To show support for your team, it seems that gender equality has been achieved in Japan. At the end of this month, two international friendly matches will be held in Japan. One is Japan vs Tunisia (on March 27); the other is Japan vs Uzbekistan. Both women and men look forward to watching the games, and both women and men in the spectator seats will cheer on Samurai Blue Japan. My mom hopes that the day will come when gender barriers are removed in every sport all over the world.