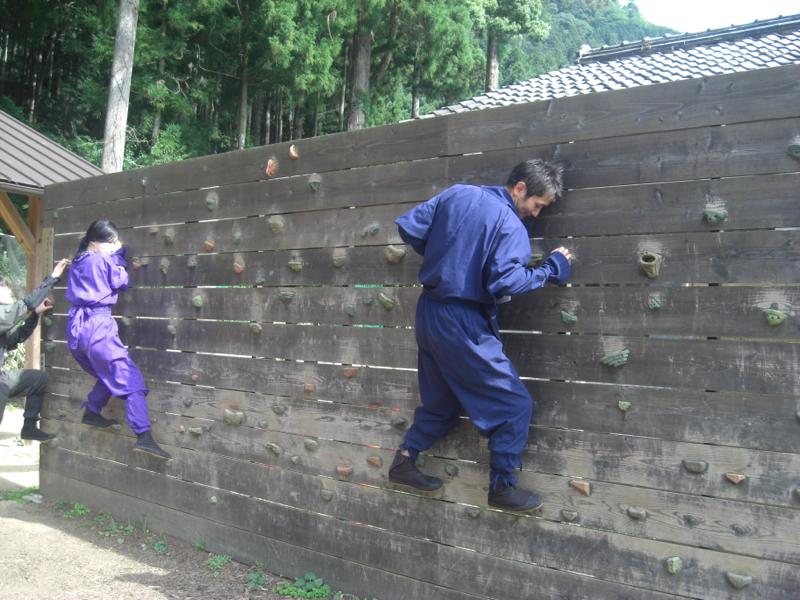 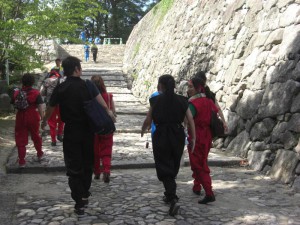 On July 20 and 21, my mom participated in a study tour on regional development, and visited Iga and Nabari, Mie Prefecture, Japan. Both are known for Ninjas. My mom and the tour participants walked around in Iga and Nabari in Ninja clothes. Have you ever heard of Ninjas? For some of you who may not familiar with Japanese history, let me briefly explain about it.

Ninjas were intelligence agents whose mandate was to collect secret information from feudal lords or samurai warriors who were enemies of each other during the Warring States period (from the mid-15th through the 16th centuries) and the Edo period (from the 17th to the mid-19th centuries). It is said that in those days, a lot of excellent Ninjas were working in Iga and Nabari. Until the mid-19th century, the Tokugawa Shogunate government, a feudal administration, had reigned in Japan. At the end of the 19th century, the Tokugawa feudal administration was overthrown by courageous imperialists, and then Japan began to move into a democratic nation. This epoch-making event is called the Meiji Restoration. The year 1868 was a dawn toward democratization. The end of the feudalistic society terminated the roles of the Ninjas.

As you can imagine, the Ninjas had to be agile and tactical in order to get secret information from the enemies. They often had to hide themselves somewhere in the gardens and residences.

Today, in Iga, a group of professional Ninjas performs a show to introduce some Ninja martial arts to tourists. In addition, local guides introduce an old Ninja residence which has been preserved, and explain how the residence was tactically designed in order for the Ninjas to hide themselves from their enemies.

Nabari has also some tourist attractions. In the deep mountain, local people provide tourists with hands-on opportunities to test their physical agility like Ninjas. The Nabari local government and a civil society are promoting “Ninja Tourism” in collaboration with the Iga local government and the Mie Prefectural government. They have created several Ninja training activities for tourists. Here are some examples:

My mom tried all the activities with her friends. She received a Ninja certificate from the Ninja promotion association. Congratulations! But she got sore muscles the next day. She is not young any more. I guess she was too old to challenge. Me? I am a bear. I am physically “beary” strong. So, I am sure that I could do all “beary” well if my mom took me there. Ha, ha, ha!