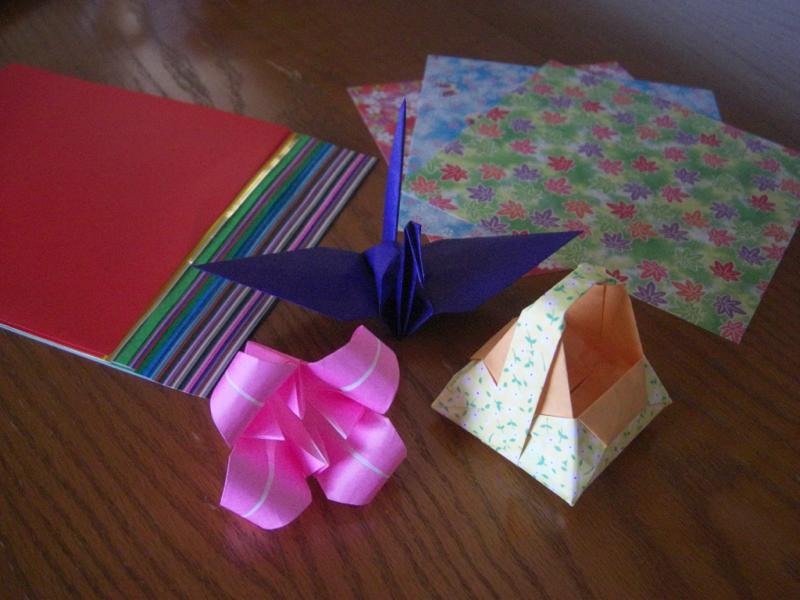 My mom is good at making lovely things with paper. She folds paper into flowers, animals, dolls, boxes, and so on. In Japan, it is quite common that children learn how to fold paper into figures. This paper-folding technique in various colors is called Origami. My mom is “beary” good at Origami.

In Tokyo, there is a “beary” interesting facility called the Origami Center. It was founded in 1858. The founder, Mr. Kosuke Kobayashi, started to learn how to make paper from plant fiber, and how to dye paper. This was the beginning of Japanese Origami Art. In 1885, the first Minister of Education of Japan, Mr. Arinori Mori, adopted Origami in early childhood education, having referred to the education guidelines of Germany and his experiences in having studied in the U.K. and the United States. Since then, Origami has developed throughout Japan. Thanks to his early childhood education policy, even today Japanese children can enjoy Origami.

The other day, she dropped by at the Origami Center. She happened to meet the third president of the Origami Center. The man with my mom in the photo is 100 years old! She is holding an orange Origami pencil and a green turtle with her right hand and a blue whale with her left hand. The man folded all three. He showed her how to make the pencil. Isn’t it amazing that the 100-year-old man’s fingers are still dexterous? What a wonderful technical transfer from generation to generation!

On that day, at the Origami center, she learned how to make a heart with a crane on it, not from the 100-year-old man but from another Japanese teacher. Look! This is “beary” nice! The heart means love, which is universally understood. In Japan, it is said that the crane symbolizes longevity. Wow! The combination of a heart and a crane will be a wonderful gift for those you love. As the photo shows on the right, why don’t you write a short message, put it in the heart and give it to the person you love? 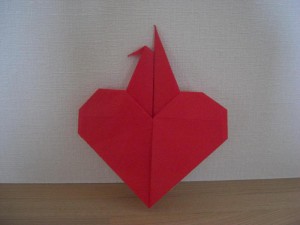 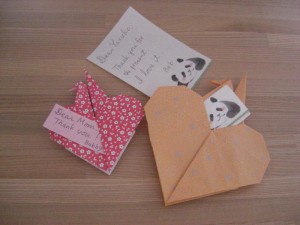 I will show you how to make the heart with the crane in the section of “Let’s BEAR!” in a couple of months. If you have a chance to come to Tokyo or live in Tokyo now, why don’t you visit the Origami Center? I am sure that a lot of Origami art will impress you “beary” much.